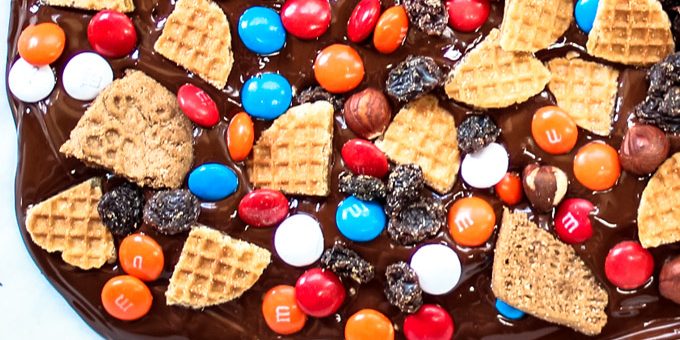 Meet my new Dutch treat Royal Dutch Chocolate Bark which can be added to the long list of traditional orange (and red, white, blue) colored foods eaten during sporting matches like the World Cup Soccer Games and the annual national celebration like Dutch King’s Day*. This can be made well in advance and can be easily enjoyed  in front of the TV or simply given away as a gift.

If you never had chocolate bark, it’s not chocolate covered bark from a tree. However, it does bear a slight resemblance to rough pieces of (tasty) tree bark when you are done with it. It’s actually a sheet of chocolate that is usually covered with candies, nuts, dried fruits and in my recipe also cookies. Usually the traditional peppermint chocolate bark is served around Christmas and the holidays.  Of course you can make chocolate bark the whole year through. My chocolate bark can be served at any Dutch themed event. Whether it is the annual King’s Day celebration or the World Cup Soccer  Games. We all dress in orange and watch this with a piece of Royal Dutch Chocolate Bark. So, let’s do this:

Step 1: Line a cookie sheet with parchment paper and set aside.

Step 2: Melt the chocolate: take full one pound of chocolate (with 1 teaspoon of shortening, a flavorless oil, or butter) in a double boiler ( a heatproof bowl placed over a saucepan of simmering water – the bowl does not touch the water). Once melted, remove from heat and spread into a 10-12 inch (25-30 cm) in the shape of a rectangle (1/8 – ¼ inch thick) on a parchment lined baking sheet.

Step 3: Immediately sprinkle the M&Ms, the cookies, hazelnut and raisins over melted chocolate. Set aside to cool for 1- 2 hours or  in the fridge for 30 min. until firm.

Step 4: Once bark is firm, gently pull off of parchment and break into pieces and enjoy. Store in an airtight container in a cool place. Yummm!

The Netherlands has a new King since April 30, 2013. His majesty King Willem-Alexander succeeded his mother as the reigning monarch of the Netherlands. His birthday is on April 27th and is a Dutch national holiday.  Practically the entire country is in celebration mode and there are all kinds of activities in his honor.  Young and old bring their goods to the big flea markets (vrijmarkt or literally free market, since no one has to pay taxes on their sales) to sell on the streets and in the parks. Special activities, concerts and musical performances are organized. It’s one big festival and the people are mostly dressed in orange, as a tribute to the royal family as their last name  is ‘Oranje’ (orange). On this day typical orange themed food and drinks are available. Lot’s of pastries and orange colored liquor (oranje bitter) for example. Amsterdam is a favorite destination and hosts  about 2 million happy people every year. To celebrate this joyous occasion I thought of introducing a new sweet Dutch treat.