Risotto with an Indo Dutch twist 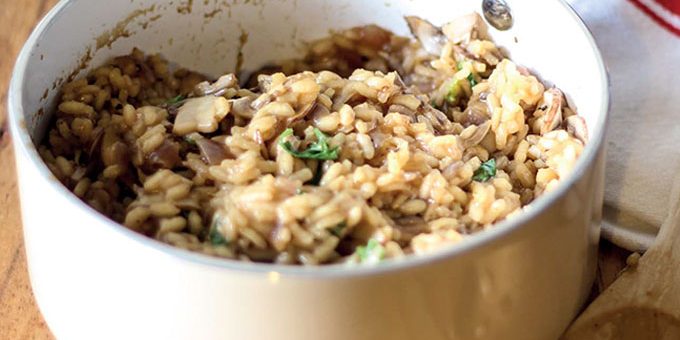 When two cultures meet, beautiful things happen. Like the Indo Dutch cooking style, for example, derived from a blend of Western and Oriental cooking techniques and ingredients. A kitchen that is the heart of the hybrid culture that originated in the former Dutch East Indies (modern Indonesia). This cooking style came along with the Indo Dutch, who migrated to other countries (such as the Netherlands and America)after the Second World War. What many know as ‘Indo cooking like grandmother’ does not only mean indigenous dishes from the ’emerald belt’, but also dishes of European origin, whether or not enriched with local spices. This fusion kitchen has many Indo-European dishes, such as: Pastel Tutup, Indo Dutch Macaroni, Frikandel Pan or Indo Dutch Huzar Salad.  ‘Playing with ingredients’ and ‘introducing new things’ is inherent of Indo Dutch cooking style. Italian cuisine belongs to my favorites. Inspired by the Indo Dutch Macaroni dish, now meet  Risotto with an Indo Dutch twist. The recipe comes from the cookbook ‘The New Indo Dutch Cuisine of Jeff Keasberry,’  published in the Netherlands in Dutch. Something different… Bada Bing Bada Boom!

Risotto with an Indo Dutch twist by Jeff Keasberry

Heat 1 tablespoon of sunflower oil with sesame oil in a pan on moderate fire. Fruit onion, garlic and ginger until they are soft, about 5 minutes. Add the rice and bake until the grains are glazed. Then add about 250 milliliters of the hot broth with the soy sauce in small quantities. Put the fire so low that the rice is just boiling. Stir until the moisture is absorbed. Then add another soup spoonful of broth, let it absorb and add a soup spoon for as long as almost all broth is ready.

Heat the remaining oil in a frying pan on high heat. Bake the mushrooms in golden brown, in about 3 minutes.

Add mushrooms, coriander (or parsley if you do not like coriander) and add remaining broth to the rice and stir until the moisture is absorbed and the rice is ‘al dente’. Season to taste with salt and pepper.