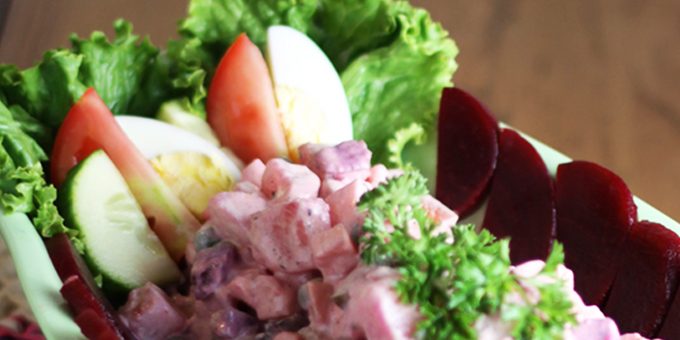 This special treat is served traditionally on New Years Eve – especially at house parties of  Dutch-Indonesian people. A light purple colored dish with a fresh, lightly sweet ‘n sour taste. There are many ‘family recipes’ out there. I am posting my Dad’s version, which has a longer ingredient list.

In many countries, this popular salad is also known as Russian salad. In Holland, this is a very popular meal known as  ’huzaren salade’ (Hussars salad), which the Dutch brought  to the archipelago of the Netherlands East Indies (now known as Indonesia). There are different stories about the origin of this salad. It is said that it was  a salad named after the Hussars, who were originally Hungarian horsemen, in the Imperial Austrian armies battling the Turks. Hussars were mainly deployed to enemy territory to explore. For fear of being noticed, they could not make a fire for cooking. Instead they mixed their food to make a cold salad. Interesting!

Another version is that the original version of the salad was invented in the 1860′s by a Belgian named Lucien Oliver. He was the chef of the Hermitage, one of Moscow’s most celebrated restaurants. The salad became known as Olivier’s salad and quickly became immensely popular with Hermitage regulars. Some of the ingredients included cold meat like ham or tongue, garnished with capers, anchovy filets, etc. There are different recipes depending on country, region and household. The Dutch East Indies version uses beef (sometimes leftover beef stew or tongue), boiled peas, diced carrots, potatoes, beetroot pickles, and cucumber pickles. Some versions use diced apples mixed with mayonnaise, salt, pepper and mustard for enhanced flavor. Sometimes decorated with boiled and sliced eggs, cucumber and beet root pickles.  Served with sliced baguettes.

When making your own pot roast: season the meat with salt, pepper, nutmeg and sear it in butter on all sides and then set aside. Add enough water to come about halfway up to the beef. Put the beef in a covered pot (Dutch-oven) and place in oven for about 3 hours until fork tender. Let the beef cool. Dice the meat, onions, pickles, potatoes, apples, pineapples, carrots. Mix it with the peas, the mayonnaise, the mustard and season with the pepper, salt, sugar and some vinegar. Place in the fridge for about an hour. When ready to serve; place some washed and drained lettuce leaves on a dish. Put some salad mixture on top. Decorate with sliced eggs, beets, pickles or cucumber and garnish with some parsley. Serve with baguette and a cold glass of Sancerre.