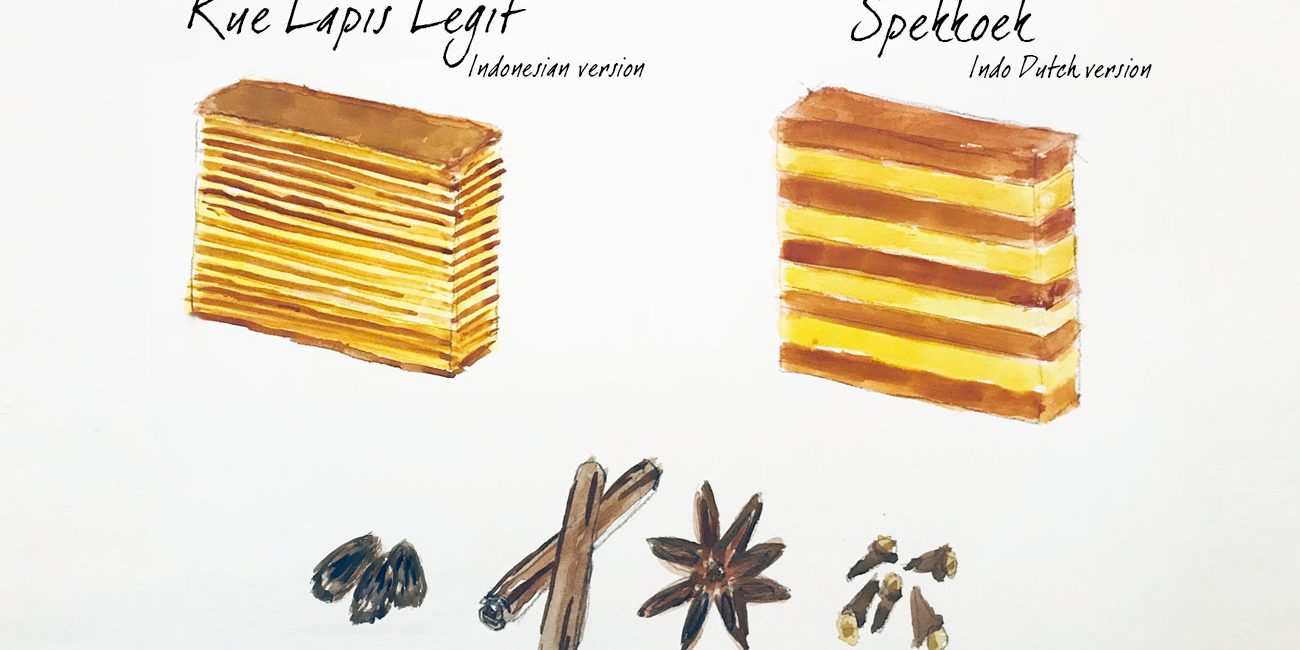 There is one top-rated culinary legend that connects Indonesia with the Netherlands, the signature delicacy of the Indo Dutch cuisine: Spekkoek.

The history of this cake is quite rich, so is the taste. There are different theories about how this cake came to be and how it got its name. Let’s explore.

Born in Indonesia and evolved during colonial times in the Dutch East Indies, this naturalized Dutch cake has become so common that you not only find it at Indonesian/Asian grocery stores, but also at local Dutch bakeries, supermarkets and at a specialty store where you least expect it. The Dutch word spekkoek literally translates as bacon cake. The funny thing is, there is no bacon in it. To add to the confusion this cake can also be found in some butcher shops. What are they thinking? Sounds like bacon, looks like bacon, so it must be bacon! Hilarious.

In Indonesia the cake is known as Kue Lapis Legit, which literally translates as sweet thousand layer cake. They also use the name Spekuk, which obviously comes from Spekkoek. For those who think that Spekkoek and Kue Lapis Legit are the same, I say; there is more than meets the eye….

Look closer and you will notice that there are differences between the contemporary Indonesian version of the cake and the classic Indo-Dutch version.

NAME
In Holland: the cake goes by the name Spekkoek The Dutch word spek literally means bacon. Allegedly, in the old times, pancakes were baked in pork fat. Others say the word spek came from the appearance of the cake; resembling bacon. Other food historians say the spek is derived from specu, which comes from specerijen in Dutch – spices in English. Speculaas is the Dutch word for the Dutch spiced shortbread cookies which is made with similar ingredients as the spekkoek.
In Indonesia the cake goes by the name Kue Lapis Legit. Lapis is derived from the Dutch word lapjes, which means layers. They also use the name Spekuk – pseudonym

BORN & RAISED
Dutch East Indies (Indonesia in Dutch colonial times) It’s often referred to as Indonesian spekkoek, as it was born in the geographical area now known as Indonesia. But in my opinion, to be historically correct, it should be called Indo Dutch Spekkoek from the Dutch East Indies.

RESIDENCE
Holland, Indonesia and anywhere in the world where the art of Indo Dutch and Indonesian cooking is practiced.

CULINARY DNA
Cinnamon, cardamom, nutmeg, clove and anise. It has lots of eggs – up to 30. European cake baking techniques with the use of ingredients from the Spice Islands – aka Moluccan islands.

COOKING TECHNIQUE
a) Dutch oven with a charcoal fire on top or top grill in electric/gas ovens.
b) the Indo Dutch version: 2 kinds of alternating layers with two different colored batter.
c) the Indonesian version: 1 kind of batter.

APPEARANCE
a) Depending on the baking pan used (square or round), the cake is cut in slices or wedges.
b) the Indonesian version has more, thinner layers (minimum 18). Also the dark brown layers from the Indonesian version appears to be the browning effect of the whiter batter due to the top grill.
c) the Indo-Dutch version have thicker layers and distinct 2 different colors coming from two different colored batter; one is vanilla and the other is spiced.  This difference also has its effect on texture and taste. The number and thickness of the layers depends on the family recipe and how much time the cook wants to spend making it. Some go up to 30 layers.

TASTE & TEXTURE
a) Indo Dutch version: two different batters – distinct different tastes between vanilla and spice layer. Has a rich taste.
b) Indonesian (commercial) version: one batter, some say taste is more bland than the other version.
c) Texture depending on the recipe. Some versions are irresistibly smooth and velvety. When you cut, the knife glides thought the cake like butter. Others are slightly dense and some drier.
d) When served it is usually cut in thin slices because of its rich taste.

TRADITION
Originally the cake was served around the holidays in the month of December. It has the typical aromatic spices like cardamom, nutmeg, cinnamon and cloves. Similar to its relative, another spiced treat called speculaas (windmill cookie).  Nowadays, in both countries, it can be enjoyed throughout the year at any occasion as an after dinner treat, or just whenever you have a craving.

EFFORT
This delicacy is considered quite expensive due to the time consuming and labor intensive process to bake and build this cake layer for layer.

MODERN VARIATIONS
Pandan, chocolate, prunes, raisins, to name a few. There is a spekkoek ice cream and even a spekkoek liqueur called Saya.

In conclusion, one can say that the two cakes evolved differently. Recipes vary from family to family, in terms of batter, number of layers and thickness. One kind leans more towards the many thin layered and the other to the more thicker layered one. In my opinion, the original cake was intended to show distinct two alternating layers. The white vanilla layer to resemble ‘spek’ (bacon). Also, I prefer the version with two kinds of batter. If you make the layers too thin, you might as well mix the two batters into one as it becomes too difficult to distinguish the two different flavors.

To me, spekkoek is also a symbolic cake; the alternating brown and white layers represent the two West European and Southeast Asian cultures coming together in one rich Indo-European layer cake. A reflection of the Indo Dutch culture. The different stories about the creation of spekkoek and how it is enjoyed, makes it a very interesting topic for discussion, to say the least.

You be the judge which one cake you prefer. Like my grandmother always used to say: “One cannot argue about taste, but we can talk about it!”

Update March 24th, 2019; To better illustrate, the one on the left is the commercial spekkoek aka kue lapis legit  or spekuk in Indonesia. You can clearly see the difference in the type of layers. What looks like a different layer turns out to be the browning of one and the same layer. Judging from the comments to this article on Social Media (Facebook and Instagram) people could not clearly see the difference from the drawing. What has also become clear is that many families in the Netherlands, USA and Indonesia make spekkoek with more than 20 layers and therefore it often resembles the illustration on the left. Yet, with 2 different types of batter.