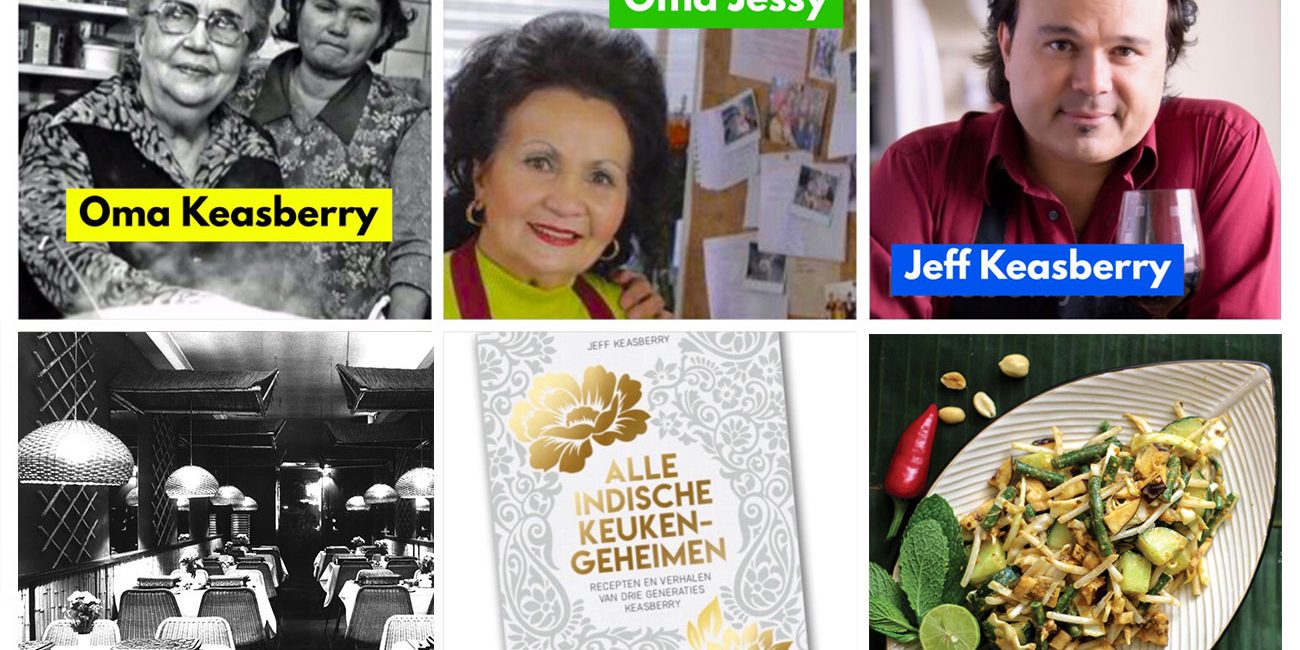 Dutch people like home cooking books that contain traditional, but not too complicated recipes. They love cookbooks with familiar comfort food that enhance the homely atmosphere. Books which start with a personal story from the chef about those delicious meals from parents and grand parents. They want to read cookbooks in order to connect with an origin. The context of the recipes remain important. Despite the immense popularity of cooking videos on television and in social media, we still see a growing trend in cookbook sales in the Netherlands. As one lover of cookbooks expressed: “I like caressing the cover, my fingers lingering on the pages, breathing in the aroma of fresh paper, dreaming of what might be if I took the book home.” This year a number of new books on Indonesian and Dutch Indies fusion cuisine have been published in the Netherlands by authors with roots in the former colony of the Netherlands.

My grandmother ‘Oma Keasberry’ who began her Indonesian restaurant Dokja in Amsterdam in 1954, published her popular cookbook back in 1976, which remained in print for over twenty years. Nearly fourty years later, grandma’s secret recipes were still popular. So, by special request from fans and patrons of the family restaurant, I published my first cookbook memoir, continuing my grandmother’s and mother’s legacy. My mother was a chef in the restaurant and appeared on 24kitchen – a Dutch cooking channel. This book includes family anecdotes, the history of Dutch Indies cuisine, explanation of the food customs of our hybrid community, many cooking tips and serving suggestions with full color pictures.

Two years later I published my second cookbook in Holland on ‘the new Indo-Dutch cuisine by Jeff Keasberry’. The first of its kind, using the creative cooking style I was taught to serve more contemporary and easy to prepare dishes. A collection of make-overs of classic dishes and recipes which are suited for a healthy and busy lifestyle. Actually, the cuisine brought from there to Holland in the 1950’s has stood still since then. Truth be told, when my book came out, not everyone (the purist) in the Dutch culinary world was receptive to tampering with grandma’s sacred recipes. Luckily time has changed and people are more open to a new approach of this time-honored cuisine brought from the archipelago.

Another book taking a bold approach on the level of fine-dining is called Baru Belanda – a best-selling cookbook by celebrated Michelin star Chef Pascal Jalhay. My appearance as guest chef in this new Dutch cookbook has sparked renewed interest in the recipes of the Keasberry family.

As of this month ‘Alle Indische Keukengeheimen’, a special edition of my first two books will be published in a new format. The book is bigger, heavier and combines the best recipes (170+), some with new pictures. A must-have for the collector and of course a great find for the passionate cook who wants to explore the shared culinary heritage of the Netherlands and Indonesia. The book is available in the Netherland in bookstores like:

The English version of my first book is available here. Or ask for it at your bookstore.