I Love Life And My Nasi Goreng with Telor Ceplok 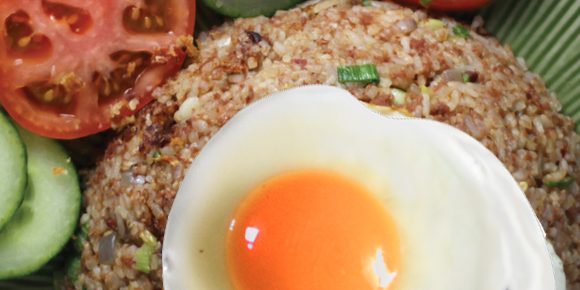 What better way to start the day than with an egg shining you in the face?

A well known national dish of Indonesia is ‘nasi goreng ‘ with a ‘ telor ceplok’. It means ‘fried rice’  with a ‘fried egg sunny side up’, the way my dad taught me how to eat it.  Cooked in the morning, usually from rice left over from previous day’s  meal with added spices. The origin of the dish and the customs around it can be traced back to the Chinese immigrants who settled in the archipelago since the era of Majapahit around the 15th century. In their culture it is considered a taboo to throw away uneaten foodstuffs. Compared to Asian counterparts the Indonesian version contains ‘kecap manis’ (sweet soy sauce) and is often preferred stronger and spicier. Served with ‘krupuk udang’ (shrimp crackers), fried shallots and some sliced cucumbers and tomatoes on the side.

Nasi goreng is usually served for breakfast in Indonesia, but can be enjoyed throughout the day as a main meal or for example as part of an elaborate buffet style dinner party. Among the Indo people (Dutch-Indonesians) it is considered one of their favorite comfort foods, quick ‘n tasty.

I like my nasi goreng best stir fried long enough until it gets this light crispy textured coating. For that you need rice that had time to dry – leftovers refrigerated overnight. My advise is not to use freshly cooked rice as it will not fry up right – it will be too moist and soft.

An interesting thing worth knowing is that the word ‘ceplok’ is considered an ‘onomatopoeia’  [on-uh-mat-uh–pee–uh]. According to the dictionary; the naming of a thing or action by a vocal imitation of the sound associated with it. In the case of the egg it’s the sound of the drop of the egg in the pan once you cracked the shell open: ‘che-plock’. The Indonesian language has many words like that. Also in the English language… think of ‘cuckoo’, ‘meow’ and ‘honk

Back to my dad, he was a star chef. One of his specialties was his nasi goreng on the fly – within 10 minutes on the table. Not only did he teach me how to eat my fried rice, it also symbolized his motto… a tasty reminder ‘to stay on the sunny side of life’!