LA Times writes about the Dutch-Indos 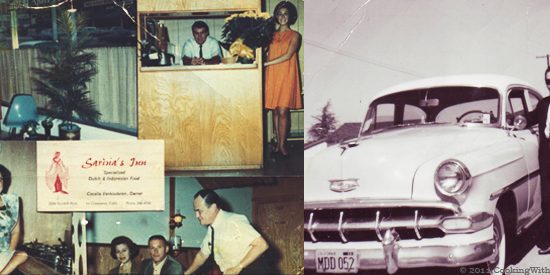 Since the late 1950s, tens of thousands Dutch-Indos emigrated to the U.S. from the Netherlands, part of a post-WWII migration that went into the late ’60s. Most of them moved to Southern California like my grandparents and my father and mother, aunts, uncles and their children. My parents went back to Amsterdam to help out my grandmother managing her restaurant. My aunt Cecilia Verkouteren – Keasberry, started a Dutch Indonesian family restaurant in La Crescenta; Sarina’s Inn.
Dutch-Indos are spread out throughout the US. The largest Dutch Indo community can be found in Southern California, with over 100,000 people in greater Los Angeles area.

“The California dream represented a myriad of personal and professional opportunities for the Indo diaspora. More than a few followed family and friends who had already arrived on the West Coast. Some traveled coach across America in bumpy railcars from the East Coast, tired of the same chilly climate they’d so disliked in the Netherlands. For a few, collecting fan cards of favorite actors and memorizing lyrics to big-band songbooks had made the Golden State a beacon since childhood. And for all practical purposes, it was a logical choice: The postwar economy boomed, jobs and housing were plentiful, schools were good and, much like in Indonesia, the weather was glorious year-round. They may have longed for home, but they knew they could belong here.”

The article mentions the Indo Project, an English-language resource for Dutch-Indonesians in the U.S.:

“Bianca Dias-Halpert, who was born in the Netherlands and raised in the U.S., has spearheaded the Indo Project, one of the few English-language cultural resources. “The Indo Project has been a work in progress since 2005,” she says. “There’s a wealth of information about us in Dutch, and the community in the Netherlands is well connected, but there’s almost nothing here. After a visit back to Holland, I saw how disconnected we were from our culture.”
Read the article:
LA Times: The Long Way Home.

I have joined the board of The Indo Project, to contribute and educate English speaking people about our rich culture. My focus is mainly geared towards our culinary heritage; Dutch-Indonesian (Indo-) cooking and the eating culture. If you are interested to learn more about The Indo Project follow the link:
http://www.theindoproject.org/