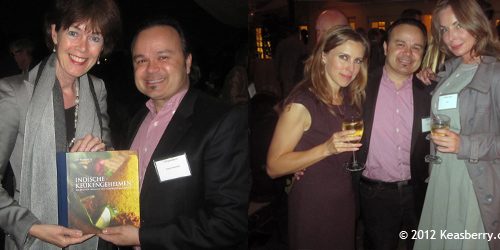 Last Monday, April 16, I handed my cookbook “Dutch-Indonesian Kitchen Secrets’ to Renee Jones-Bos, the Netherlands Ambassador to the United States. This happened during the Holland Hollywood Connection (HHC) event at the Beverly Hills Country Club – organized by the Consul General of the Netherlands Bart van Bolhuis, in collaboration with the Netherland America Foundation. Mrs. Jones-Bos was pleasantly surprised with the collection of secret family recipes and said that in Washington DC on occasion, a delicious Dutch-Indonesian rijsttafel (rice table) was cooked and served. We both agreed that the ‘rijsttafel’ is part of the national culinary heritage and cooking repertoire and can be presented with pride. Mrs. Jones-Bos was appointed Secretary General of the Ministry of Foreign Affairs in December of 2011 and will begin her new duties in mid-2012. I asked her to let me know as soon as some recipes were cooked after her return in the Netherlands. Would she really cook it herself or have it done?

On this evening I also met reality star Princess Inge, one of the four ladies of the popular Dutch TV Net 5-series Dutch Hollywood Women. On my other side on the picture: Marieke Oudejans, TV / film producer, journalist, entertainment consultant and co-founder of the Holland Hollywood Connection (HHC).

The Holland Hollywood Connection (HHC) is the official network for Dutch professionals working with or within the Hollywood entertainment industry.
Founded in 2010, the HHC facilitates exchange of knowledge and information between its members and supports business opportunities through network events and promotional activities.