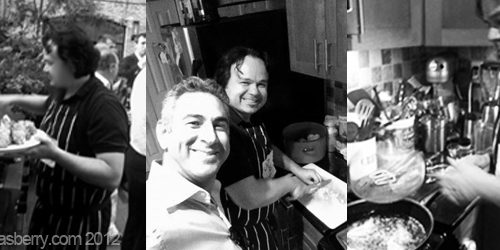 The sun felt warmer to the face when it hit us by the time we came out of the train station on Flatbush Ave in Brooklyn. It was a true mid-summer Wednesday in NY.  My friend Erik and I just came from the Netherland-America Foundation’s Annual Meeting of the Members, held in one of the towers in the financial district of Manhattan.  Erik, a successful banker and networker extraordinaire, was hosting a dinner meeting for the gentlemen of the Round Table at his ‘humble abode’.  The Round Table is a unique worldwide service club, with members (by invitation only) comprised of young and like-minded professionals.  These noble men meet regularly to come up with workable plans to helping the needy through community service and project support. Sharing a mutual goal and desire to working for charity and making new friends, creates a strong bond.

I had the privilege to cook a dinner for these knights of the modern age.

With my bag full of supplies and kitchen tools I brought from LA, I landed in the kitchen of Erik & his lovely wife Anita. Time for ‘mise en place’: getting prepared for the big operation. I had only two hours until the guests arrived. I pulled out my checklist. Let’s verify; ingredients? Check! Erik arranged for most of the ingredients to be there and his wife to be gone. Gone? ‘No women allowed,’ Erik said. Back to my list: assistant? Darn, there goes my assistant. No check mark!  ‘No worries, I will help!’ Erik said and continued; ‘Can I interest you in my self made Ginger Liqueur?’ Sure, help me get  drunk… that’s what I usually do with my students when I conduct my cooking workshop. Sipping while prepping makes everything taste good by the time we have dinner. Wow, this stuff is dangerously smooth as silk, not bad for a bootlegging banker, I remember thinking.

Someone at the door? – saved by the bell and back to the cutting board. The first guest was early. The president of RT1-NY had arrived; Mesut Celebi –a fellow Dutchman and jovial entrepreneur of Turkish descent. He mentioned he came on his bicycle – yay, NY goes Dutch!

Indo dimsum and then some

While I was preparing the meal inside, the friends were coming together on the outside deck to start their meeting.   Laughing, sharing their heroic experiences and drinking beer and snacking on some of the Krupuk Udang (shrimp crackers) I had freshly prepared for them.

Time was flying while I was cooking up a storm in the kitchen. On the menu for that evening was: Siomay Bandung – steamed dumplings Bandung style – named after a city on the island of Java, Indonesia.  Siomay is my mom’s childhood delicacy. She calls it Baso Combination Jessy Style. It’s similar to Chinese dim sum.  An assortment of steamed vegetables and tofu, filled with a mix of ground beef and fish, served in spicy peanut sauce and black and thick sweet soy sauce.

Hear ye Hear ye – dinner is about to be served!

Before I got to serve dinner I was asked to tell the wonderful tale of Keasberry and his Indo Heritage Cuisine – considered to be one of the world’s oldest fusion cuisines.  A blend of East and West, combining the best of Dutch and Indonesian ingredients and cooking techniques, evolved over hundreds of years since the beginning of the spice trade in the beginning of the 17th century.

I also got to share that my cookbook (Dutch-Indonesian Kitchen Secrets) was launched in the Netherlands in March of 2012. Unfortunately, only in Dutch. English version expected in 2013. I could have gone on for another hour, but it was getting dark and late. I needed to feed these hungry and salivating men of the round table. I brought the food out and prepared their plates from the rectangular table. The pay off for me defying a hot and steamy kitchen, was to receive the approving smiles and comments of my guests, after their palates got a delicious surprise.

The joy of cooking and cleaning

While their stomachs got filled and their hunger got stilled, I proceeded to go back to my operating room to find a disaster area – like a bomb had exploded! A wise man once said:  a culinary artist is judged by the mess he leaves in the kitchen – the more the better! Judging by the mess I made, I must be a hell of a cook! Not long after, Erik joined me in his kitchen ‘smiling like a farmer with a toothache!’ An old Dutch saying meaning: a person who tries to be a good sport, while hiding his pain inside.  ‘No worries, the cleaning lady will take care of that!’ he said. I had the feeling he was referring to himself.  Since at the beginning of the evening he shared that he always did the dishes by hand, rather than using the ‘two dishwashers’ his kitchen came equipped with. Chapeau Erik!  So I made a beginning and Erik told me he finished the rest afterwards.

All in all we had a successful evening and it was a great pleasure to meet Eriks friends.

Maybe a next time we can serve a Rice Table for the Round Table!

To be continued… Check back for a follow up on my cooking adventures in NY later this year.