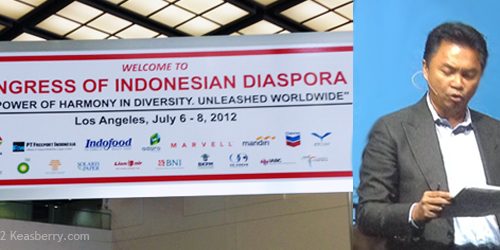 For the first time ever a Congress of Indonesia’s Diaspora (CID) was held in Los Angeles, from Friday July 6th – Sunday July 8th.  The aim of this event was to give the Indonesian government ideas, and to come up with a strategy to ignite prosperity at home. President Susilo Bambang Yudhoyono encouraged Indonesian diasporas around the world to “synergize, when he addressed the audience in a video conference during the opening night.

This historic 3-day event was opened by Dr. Dino Patti Djalal, the Ambassador of the Republic of Indonesia to the United States of America. The LA Convention center was a meeting place not just among the Indonesian diasporas, but also between the Indonesian diasporas and Indonesia’s government officials, politicians and, cultural icons, corporate players and opinion leaders. Of the dignitaries present: Minister of Tourism and Creative Economy, Dr. Mari Elka Pangesu and Minister for National Education, Prof. Dr. Ir. KH. Muhammad Nud.

The term “diaspora” in the Miriam-Webster Dictionary, is defined as “the movement, migration, or scattering of people away from an established or ancestral homeland.”  In an “Open Letter of Invitation” distributed worldwide online, the Ambassador defined the diaspora as “any Indonesians overseas, both of those of Indonesian blood or with an Indonesian spirit and culture, whatever their legal status, occupation, ethnic and tribal background, whether indigenous or non-indigenous.”  It’s estimated that about 5.8 million have migrated and settled abroad.  I say that would include people of Dutch-Indonesian ancestry too.

The 1st day was filled with cultural performances.  The 2nd day was for discussions and debates – and performance in the evening like Daniel Sahuleka during the “Harmony in Diversity” concert. Then the 3rd day was the closing of congress with a declaration that is aimed at concertizing the commitment of the Indonesian diaspora.  This declaration will become a basis for the development  of the Indonesian diaspora in the future

Outside the LA Convention Center were booths selling Indonesian foodstuffs and businesses promoting their services.

Some of the topics for discussions and debates:

1)   the empowerment of the business sector outside of Indonesia,

2)    the promotion of Indonesian restaurants overseas; this was a very interesting session on  Culinary Diplomacy, a session led by Dr. Mari Elka Pangesu – on which I will report in a separate article,

3)    connecting with local politics and governments,

4)    gender issues —including the role of women as bread winners or community leaders,

5)    the role of the younger generation, education and innovation.

Diaspora Indonesia, wherever they may be and through the CID, will be a great community that is able to build on its strength, and create a wave of networking possibilities among its members.