How to eat a rijsttafel 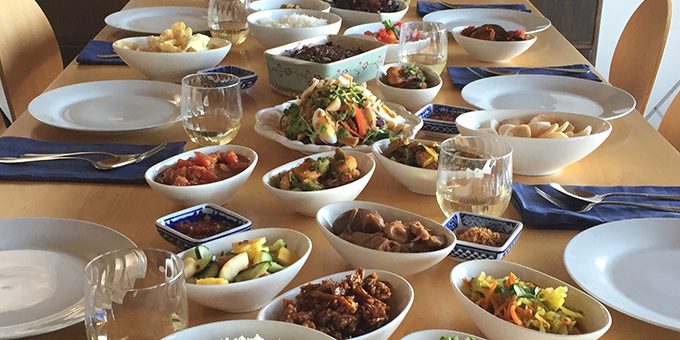 Do you really know all there is to know about the Rijsttafel? Just in case, it is a Dutch word that literally means ‘Rice Table’ in English. But what is it? In short, it is an elaborate banquet of regional Indonesian dishes served Dutch style. As I explained in my cookbook Indo Dutch Kitchen Secrets, it was invented by the Dutch during the time when Indonesia was under Dutch rule and known as Dutch East Indies. Affluent Europeans would serve the Indo Dutch Rijsttafel to impress their guests and present a selection of 20 to 40+ dishes. The Rijsttafel is served in many Indonesian restaurants and became popular with the influx of Dutch East Indies people who came back to the Netherlands when they left Indonesia after it declared independence. Since 2016 the Rijsttafel is officially part of the intangible cultural heritage of the Netherlands (Unesco).

What are you to do with such a large selection of dishes on your table? How to eat a rijsttafel? For those of you new to this food fest, let me explain;

Steamed rice is served in a large bowl and placed in the center of the table with vegetable and soup like dishes, braised meat, chicken and fish items on serving dishes. Other items on the table are condiments like sambal (chili paste), atjar (pickled vegetables), some ketjap manis (sweet soy sauce) krupuk udang (deep fried shrimp crackers).

The table is preferably set with a deep/soup plate and a large spoon and a large fork are used for eating. Hold the spoon in the right hand and the fork in the left. Vork is used as a pusher onto the spoon. The spoon is also used to hold the rice with the sauces better so you can taste more. A knife or the side of spoon is used to cut larger pieces of vegetables and meat. Sometimes a spoon is enough when sitting on the couch with your plate in the left hand and spoon in the right.

Now focus on the steamed rice bowl. Place a mound of rice in the center of a deep plate. Arrange several dishes warm and cold around the rice like a wreath. The sauce from a dish can be poured over the rice. Each individual dish can be eaten with some rice. Place a spoonful of the chili paste at the edge of your plate. Do not mix and and hash! Otherwise the unique flavors or each dish gets lost and everything migth get spicy/hot! Also you don’t want the Chef, who put his/her heart and soul into making this culinary banquet, to chase you with a cleaver!

If you want to know more about Indo Dutch cuisine, click here.

Now grab a plate and let’s embark on this culinary adventure. Do take your time and enjoy!