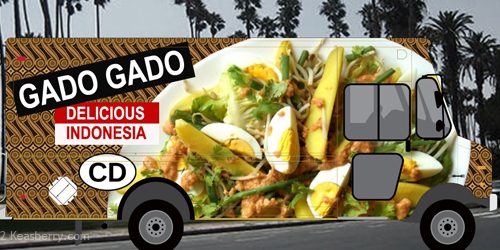 Indonesia is getting on the bandwagon of ‘culinary diplomacy’ to improve the nation’s image and spark prosperity. In other words, win the international public’s hearts through the stomachs. The aim is to boost culinary tourism, which will benefit the economy as well as improve international relations.

While Indonesia is developing a food strategy, it is asking the Indonesian Diasporas (people of Indonesian descent living overseas) to get involved and voice ideas.  This was communicated by Dr. Mari Elka Pangestu (Minister of Tourism and Creative Economy) who was the key speaker at the session; ‘promoting Indonesia Restaurants in Your Host City’  – at the Congress Indonesia Diaspora in Los Angeles – July 7th, 2012.

Looking at who is leading the pack, we see that Thailand set the standard in successfully applying gastro-diplomacy with their “Global Thai” program in 2002, which resulted in explosive growth of Thai restaurants worldwide. Taiwan started their “Dim Sum Diplomacy” in 2010. That same year Malaysia kicked off their “Malaysian kitchen for the world” campaign and South Korea their “Kimchee Diplomacy

What specialties will Indonesia promote as their culinary icons? What menu are they going to choose and stand behind as a nation? Interesting challenge if you look at the diversity and the history of the Indonesian cuisine. The potential is enormous. Indonesia being the 4th largest country in the world in terms of population, with more than 17,000 islands of which around 6000 are inhabited with more than 300 ethnic and tribal groups. They each have their regional cuisine and local specialties, based on cultural and foreign influences over hundreds of years. Traders from countries like India, China, Middle East and Europe were attracted to the natural resources of a country that was once referred to as the Spice Islands and left their mark. One major influence is the Netherlands who colonized the whole archipelago then known as the Dutch East Indies. All this resulted in a blend of cooking styles, techniques and ingredients – out of which the Dutch-Indonesian fusion cuisine was born. There are a couple of dishes that stand out and score high on the popularity charts.  According to CNNGO.COM the results of their 2011 poll held under 35,000 readers showed the world’s most delicious dishes are Rendang at no.1 and Nasi Goreng at no.2, trumping Thaifood icons like Tom Ya, Goon and Pad Thai. (read more)

The government of Indonesia is offering advice to restaurateurs on how to successfully operate and grow the restaurants. My suggestion is to also look at the Netherlands, which has the highest number of Indonesian restaurants outside of Indonesia. Not only because of its colonial past and high number of descendants of Indonesia living there, but also because the Dutch have embraced the food and made it part of their national cuisine. One relic of this culinary heritage is the famed Indische Rijsttafel (translated rice table of colonial Indonesia). The Dutch and Indo people are considered the Ambassadors of Indonesian Cuisine, endorsing the cuisine  with pride to the international public. One can find a wide variety of Indonesian eateries  take-out restaurants to fine dining establishments in Holland.  Offering all kinds of delicious dishes based on traditional Indonesian recipes or following more contemporary trends. Some of these restaurants are members of the ‘Selected Indonesian Restaurants’. SIR is an organization who is committed to having regular culinary meetings, to sustain and improve the product and service of these high-end restaurants

The name for this culinary diplomacy campaign should be Gado Gado, one of my childhood favorite dishes. A well-known Indonesian meal of mixed vegetable salad, served with peanut sauce.  It’s not only delicious, it’s also nutritious because of the added eggs and tofu (protein), the lontong and potatoes (carbohydrates). Gado Gado in my view is a good analogy for the integration of many different cultures of Indonesia which combine like a salad. Like it’s ingredients, do not merge into a single homogenous culture, but keep their own regional characteristics. Let’s call it Gado Gado Diplomacy, a great culinary representation of a country that offers healthy, natural ingredients, with a rich culinary tradition  and unique tastes and flavors.

Hey  I should start a Gado Gado Food Truck in LA. With the proper sponsors this can work. Indonesia, are you reading this? I even throw in a tagline for branding:  Delicious Indonesia!

The journey has just begun!