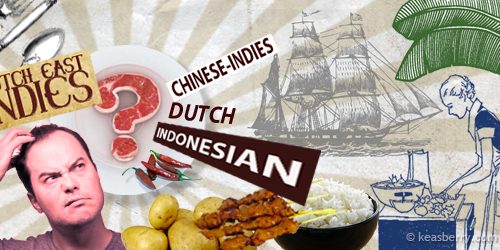 ‘Pea soup served over rice with sambal oelek? That is not ‘Indies’ cuisine!

I get a similar response from people when I tell them that this Indies cuisine offers its own version of macaroni and cheese.  Some frown when I explain that  ‘Frikandel pan,’  (a meatloaf dish out of the oven) and Hussars salad with beets are also Indies. This may come to some as a culinary culture shock.

In the Netherlands, the terms ‘Indonesian, Indies or Chinese-Indies’ are often used interchangeably when it comes to their food. In this article the word Indies does not refer to the Republic of Indonesia or India. The adjective Indies is derived from East India, once known as the Netherlands East Indies, and signifies the sub-culture and the people with roots in the former colony of the Netherlands. Even though it refers to a different time period and a country that no longer exists, the people, the customs, the food and eating habits that came from there, still do.  Outside of the Netherlands, when referring to the people of Eurasian descent, its culture and food, the following terms are used in English; Dutch-Indonesian or Indo-European (or Indo people or food).

Dutch-Indonesian cuisine is one of the oldest fusion cuisines in the world. Internationally, little is known about this culinary treasure, coming from the country also known as the emerald belt. Does the lavish Rijsttafel sound familiar? If you have visited the Netherlands or have come into contact with the Dutch it just might. Literally translated ‘Rice Table’, the Rijsttafel is a spread of 10 to 20 (sometimes even more) exotic dishes served with rice. The Rijsttafel is served with pride to the International public as part of Dutch national cuisine. Some refer to it as Indonesian Rijsttafel and others call it the Dutch Rijsttafel. In fact it should be called Dutch-Indonesian Rijsttafel, part of the culinary heritage of our colonial past.

Unfortunately, ill informed people in the Netherlands, including self-proclaimed culinary connoisseurs, simply refer to the fusion cuisine as Indonesian, bluntly denying the existence of a unique cuisine that has formed over a period of 350 years of colonial intimacy between the two countries. Some say: “Indonesian or Dutch Indonesian, what’s in a name? Let’s not argue over semantics!” I say: “get your facts straight!”

The confusion is understandable. After all, this cuisine was born hundreds of years ago in the geographical area now called Indonesia.  However, the rich Dutch-Indonesian cuisine has its own unique dishes. It includes not only a vast amount of native dishes borrowed from the various regions in Indonesia, but also selected Dutch dishes and a range of dishes with a European or Asian base, enriched and/or changed over time – a nice blend of indigenous and foreign ingredients, and cooking techniques. What began as a quest for the taste of home by the first Dutch traders who moved to the Spice Islands in the beginning of the 17th century, eventually evolved into one of the first fusion cuisines in the world, a cuisine in which the best of both worlds was united. It was born out of necessity, by creative cooks who had to look for substitutes when not all ingredients were available, trying to make the dishes they were used to eating in their home country. As a result many new dishes were created, which also left its mark in Indonesian cuisine.

The Dutch and Indo people can be considered the best Ambassadors of Indonesian food. Outside of Indonesia, the Netherlands has the highest number of Indonesian fine dining restaurants, take-out eateries and grocery stores. Dutch-Indonesian dishes are mostly served in domestic circles, based on secret family recipes, and handed down from generation to generation.

It’s my mission to ensure that the Dutch-Indonesian fusion cuisine is acknowledged as such in the world’s culinary history books. You can read more  about the background of this cuisine in my next cookbook: Dutch-Indonesian Kitchen Secrets.