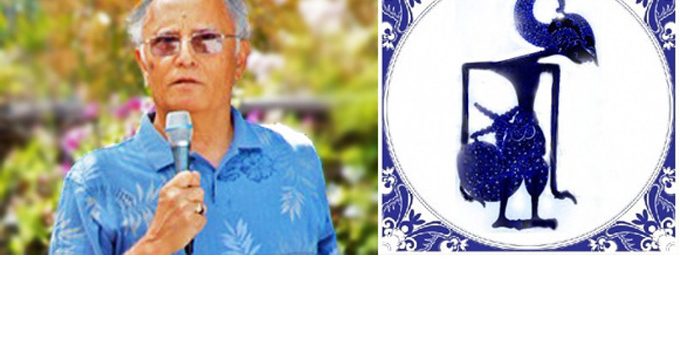 Jan gets up early in the morning, at 6am. The first thing he does is drink a glass of water for the stomach – “it gets your metabolism going!” – he says. No coffee Tubruk for Jan.

His wife Joyce cooked him a nice breakfast – a burrito filled with Indofood left-overs… one of her specialties. She came on Skype webcam next and told me what she did: ‘First I opened the freezer and got some sambal goreng boontjes tempeh , added some ketjap and sambal, sometimes taotjo or fish sause. Some scrambled egg with vegetables, onion, garlic, okra and wrapped it all, there you go!’ “Tjampur Aduk!”; Jan hollors in the background. Now I say that is ‘Indofood extraordinaire’; it’s all about being creative, a fusion of western and eastern ingredients. Spicy and tasty!

Jan and his wife live in Visalia, California (between Bakersfield and Fresno) and just returned from an Indo Kumpulan ‘down south’ last night. When they are at a gathering with Indo Friends they eat Indofood almost 90% of the time. It’s the tradition that when Indo’s get together that they talk about food, even the men amongst themselves. It gives a warm feeling to talk about heritage food.

“Like my son who lives in Holland, he is Indo to the core and is married to an Indo Girl. The Indo culture there is much more alive. In Holland it is easier… Dutch-Indo women already know about it.”

“My other son who lives in Houston is married to a Lebanese woman and adapts to her food. My daughter in Utah, cooks Indofood occasionally for herself. She calls her mom sometimes to ask how to make things. Her husband is a typical American who eats traditional American food, a meat and potato guy. His stomach does not agree with spicy food. Their children however are open to it”.

“The Indo’s and their descendants in the US,  are Americanized”, Jan continues. “But when they come home they ask their parents to cook Gado Gado… and different Sambal Goreng dishes like Oedang- boontjes.” – shrimp with green beans, which Jan grows in his own backyard. In the US it’s more diluted, Indo’s and descendants inter-marrying with other ethnic groups.

About 60,000 Indo’s came to the USA via Holland after the 2nd world war. Living in several states throughout the US. Even the ones initially settling in the Eastern states migrated to the West, going to the warmer state.. California and Oregon Washington. Now there are a good number of people (over a 100,000) of Dutch-Indo descent, disbursed over 50 states in the US.

Jan’s interest in the Indo culture was ignited when he did research for his book ‘the defining years of the Dutch East Indies 1942-1949, which took him about 3.5 years to write. He collected stories of 24 surviving prisoners of war and stayed involved. His interest has grown ever since. As ‘young’ 1st generation Indo, born and lived in the former Dutch East Indies until he was 17 years and then moved to Holland, he tells about his own story and that of others. Jan is a Founding Partner of The Indo Project (TIP) and currently serves as the Director of Development. His educational background includes a degree in Tropical Agriculture from the Netherlands and another one from the University of Hawaii. He also earned an MS degree in Health Science and a PhD in Nutrition. Retired from government and private sector employment 5 years ago. Now utilizing his knowledge, enthusiasm and action orientation to make TIP a great success.

“As elderly folks we have to perpetuate our traditions and keep the traditions alive. As an ethnic group we are going to eventually die out and be extinct if we don’t perpetuate our heritage. We would like for public in general to know and our children and grand children. Not just a group of people who flashed through American emigrant history seemingly without leaving a trace. Important to know… our group is such a sub-minority – it needs to be elevated to not just become an asterisk at the bottom of the history book.”

‘Ach, laat maar!’ or ‘Laat toch but!’ is something you hear often from the 1st generation Indo’s in America in response to the question ‘what happened back then?’ “The hardship suffered during the war and after the war that they don’t want to relive. Basically sweeping it under the rug, often resulting in passive aggressive behavior, post traumatic stress. Silent suffering. Some are sad about their experiences they lived through. As the 1st generation is dying we see a resurgence of interest. The more the children ask, the more the parents have to come up with an answers. This starts often over the age of 30 when they see their grand parents are gone. And with them part of their culture.”

“Fortunately, we have the internet available to refer people to sites that talk about the legacy of the Dutch-Indonesians / Eurasians. It will help parents answer some of the questions their children have. Knowledge that is not always transmitted to their children and the US does not recognize. It is human nature to ask ‘where do I come from, what am I doing here?’ We have the annual Dutch-Indo American Festival in Southern California – they come to the booth and ask questions – then the discussion starts.”

Jan’s advise for the younger generation: “Keep mind keen, ask questions to your parents. Don’t live in a vacuum, find out about your parents’ history. Because of the Indo Diaspora – Indo’s scattered around the world, we have a challenge to keep all informed. The Indo Project is dedicated to preservation, promotion and celebrate the Indo Culture and History through education and raising public awareness of the Indo Diaspora. We need to get the energy focused and perpetuate the Indo heritage!”

I totally agree… one way of doing that is to share the Indofood recipes and cook and eat together with family and friends . That’s what this site is all about… share the food that brings people together and keep the culinary culture alive!

You can read more about The Indo Project at: www.theindoproject.org And you can visit Jan’s website www.krancher.org