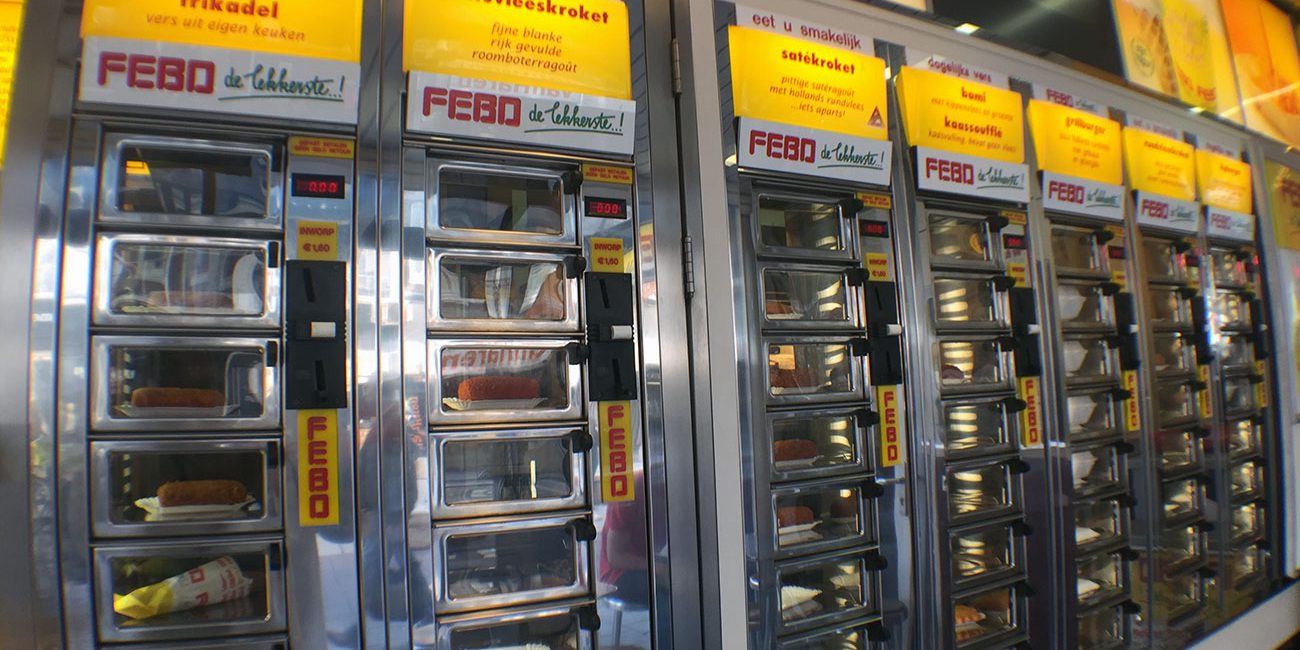 While in the airplane to Amsterdam, I already imagine sinking my teeth in my favorite snack and street food. The number one snack destined to meet its fate is the kroket, named after the French croquette. The Dutch kroket, is cylindrical shaped, deep-fried, breaded and filled with a creamy meat ragout (usually with beef, broth, flour butter and herbs). The texture is crispy on the outside and smooth on the inside, with strands of meat. Not all kroketten (plural for kroket) are created equal; you will find different fillings, like veal, goulash, cheese and shrimp.

There is a whole assortment of Dutch fast food that you can find in snack bars or walk-up restaurant, known as ‘automatiek’, Dutch for automat. My favorite snackbar is FEBO, a Dutch fast food chain, named after the street I grew up in, Ferdinand Bolstraat.

These automats, build-in vending machines feature items like: kroket, frikandel, kaassoufflés and hamburgers.  You can also place your order at the counter for fries, hamburgers and drinks.

The whole snack and fast food culture got a boost and became very successful in the Netherlands in the 1950’s. The first was opened by Heck’s in 1931. The automat machine is a German invention, where the world’s first automat was named Quisisana, which opened in Berlin in 1895. The automat in the Netherlands  proved to be a solution for tradesmen, who tried to circumvent the 1952 store closure law via counter sales. Stores closed at six o’clock. Since then several thousand automatic machines opened.

The first automat in the U.S. was opened June 12, 1902 at 818 Chestnut St. in Philadelphia Horn & Hadart. Inspired by Max Sielaff’s AUTOMAT Restaurants in Berlin, they became among the first 47 restaurants, and the first non-Europeans, to receive patent vending machines from Sielaff’s Berlin factory. The automat was brought to New York City in 1912 and gradually became part of popular culture in northern industrial cities.

After the fall of the colony in the East, the taste of the Dutch East Indies is widely introduced. In the period from 1949 – 1968 the recipes brought  from Indonesia appeared in Women’s magazines and new restaurants opened up. Many cafeteria-style venues prepared noodles and fried rice. Over the years, snacks such as loempia (spring rolls), satay, noodles and nasi balls (check my Indo Rice Balls) have entered the snack showcase.