Jeff’s 3rd cookbook is in English. It is the first English Indo Dutch heritage cookbook of its kind. Indo Dutch Kitchen Secrets is an inspiring full-color, hardcover cookbook about a unique culinary heritage, told through a collection of delicious, easy-to-prepare recipes and stories.

Indo Dutch Kitchen Secrets takes you on a journey of the Indo Dutch diaspora that started in the former Dutch East Indies. It follows the path of the people who traversed different continents and multiple cultures while managing to preserve their heritage to reinforce their identity. It’s about a little known secret in the culinary world, a cherished cultural treasure, which is at the heart of this community. It explores and celebrates the blending of Indonesian, Dutch and the resultant Indo Dutch fusion cooking style, all coming together in one fascinating cuisine – more than 350 years in the making.

WHAT IS IN THE COOKBOOK?

Indo Dutch Kitchen Secrets is more than a cookbook. The book pays homage to the mothers and grandmothers who contributed to the evolution of this cuisine. Yes, male chefs included. It’s about connecting people, a sense of belonging and joyful togetherness, or as they say in Dutch: ‘gezelligheid!’ It’s a keepsake cookbook for the coffee table and the kitchen table, to be used and passed on as a gift.

The book is printed in the US and was released in December 2016. The 2nd print came available in May 2017, the 3rd print in November 2018 and the 4th print in September 2020. TO ORDER CLICK ON IMAGE BELOW OR HERE

Jeff’s 4th cookbook; ‘Alle Indische keukengeheimen’ was published in the Netherlands and released on September 2019. A special edition with best recipes of the first two books, new size and a beautiful cover design. A true collectors item in the Dutch language. Order here.

Jeff’s second cookbook; ‘De nieuwe Indische keuken van Jeff Keasberry’ (the new Dutch Indies Cuisine by Jeff Keasberry) was published in May 2014 in the Netherlands. The emphasis in this book is on contemporary Indo Dutch & Indonesian dishes that fit in a busy and healthy life style. Jeff offers make-overs of well known classic Indo Dutch  & Indonesian dishes, but also a whole range of newly inspired dishes by applying the Indo Dutch cooking style. 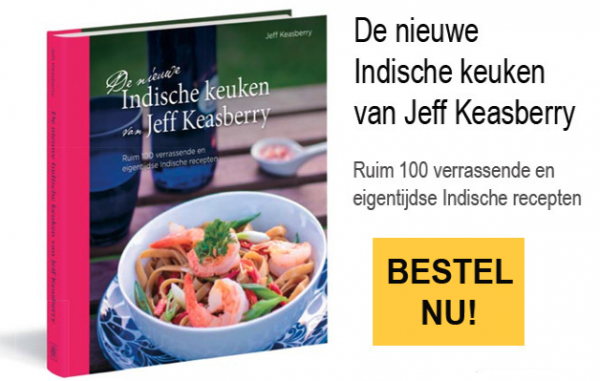 Jeff’s first cookbook ‘Indische Keukengeheimen’  (Dutch Indies Kitchen Secrets) was published in March 2012 in the Netherlands. It is a sequel to his Grandmothers popular cookbook that was in print for over 20 years. A book that is a tribute to his culinary heritage; his way of  paying homage  to his grandmother and mother, but also to the Indo-Dutch culture and cuisine. This cookbook is available in Dutch and sold in most bookstores and online. 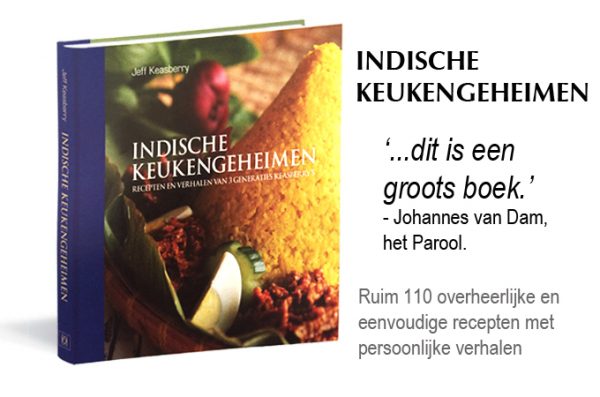