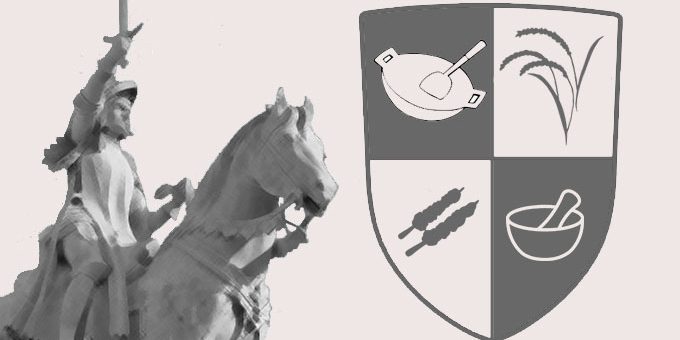 “It is only real Indo Dutch* food when it contains coriander and cumin!”

This often heard remark suggests that Indo food needs coriander and cumin for it to be considered authentic. I also often hear:

“That’s not how you should make that!”

“Why is there no Bawang Goreng served with that?”

“Why potatoes instead of rice?”

“That’s not how I learned to cook it!”

It’s obviously an Indo Dutch thing to criticize anything that is or is not ‘authentic’. Why is that? I decided to investigate further.

Indo Dutch culture is a culture of mainly reminisce. We are constantly thinking about what it was once like, way back when, in the former Dutch East Indies. Many people want to keep it that way. These same people often rebel against change. Tinkering with grandmother’s or mother’s recipes, for example, is almost seen as a sacrilege. We cherish these familiar dishes by the preservation and transmission of family recipes and traditions. Hence my first cookbook in the Netherlands “Indo Dutch Kitchen Secrets,” a tribute to the loving kitchen princesses. Think of it as “the Old Testament.”

I’ve observed that the Indo Dutch food culture I grew up with, is about to disappear under a thick layer of dust. Precisely because it is associated with old fashioned cooking, grandma’s kitchen, brownish-thickened dishes, lavish and elaborate rijsttafels. The Indo Dutch kitchen is trapped in a time capsule from before WWll. It has lost popularity because of new culinary trends and applications that meet the modern demands of a busy and healthy lifestyle.

I hope to present the principles of  “ingenuity and innovation” of historic Indo Dutch cooking within a modern context. Hence in my second book in the Netherlands, “The New Indo Dutch Cuisine”, I state that this “is my vision of how Indo Dutch cuisine can be presented differently and how it can evolve”. Think of it as “New Testament.” Both books coexist very well.

Who decides what is considered authentic Indo Dutch? Indonesia has more than 6,000 inhabited islands with more than 300 cultural and religious minorities who each have their own regional cooking style. The mostly Western-oriented subculture (or Dutch subculture) and eating habits prior to WWll, is one example. Dating back to the 19th century, the first cookbooks have recipes for both Domestic and European cuisine (and pastry)—a fusion of the two cultures. Indo Dutch families with roots in the former Dutch East Indies have their own family recipes for popular dishes. These dishes are strongly influenced by geographic location and the customary cooking style. This means there is no standard recipe for each dish.

Indonesian and Indo Dutch is the same

Let’s look at the Indonesia of today. Their kitchen has also evolved. Which food and recipes represent the best the country offers to the world? Which version of each dish do we choose? Back in 2012, this question kept Indonesian officials and chefs busy for six months. Finally, they agreed on a national menu of 30 culinary icons, which is a selection of dishes representing different subcultures.  Thailand has proven to be very successful with their “gastro-diplomacy” and now Indonesia has followed—hoping to entice the world with uniform and recognizable Indonesian specialties. Indonesia hopes to boost tourism (read ‘economics’). In my opinion, the Indo Dutch diaspora has done a great job endorsing Indo food worldwide, post World War II.  After all, we invented the rijsttafel: in my opinion the culinary ambassador of the Indo Dutch and Indonesian cuisine.

I’ve observed that public opinion in the Netherlands of what is “Indies” (Indisch in Dutch) and “Indonesian” cuisine is often based on false assumptions. Apart from the fact that the names are often confused, the name Indies is immediately associated with the Chinese-Indies takeaway restaurant on the corner of the street. Indies is often used as ‘old adjective’ for what is now called Indonesian. That kitchen comes from there, from the far, from Southeast Asia. It is assumed that the food should feature the exotic spices that we have come to expect in any oriental cuisine—and of course don’t forget the sambal! When we serve our version of a macaroni casserole, shepherd’s pie, or pea soup with rice and say it is Indo Dutch style, we often see frowning eyebrows. People forget or are uninformed that there was an Indo-European (Western-oriented) Dutch Indies culture. As I see it, Indo Dutch food culture is a combination of adopted native Indonesian dishes, European cuisine, and fusion dishes. In conclusion, there are specific styles of cooking and eating that belong to the ethnic group of Indo Dutch people with roots in the former Dutch East Indies.

More Catholic than the Pope

When it comes to protecting Indo Dutch culinary heritage, I’m proud to lead the way with many others. I understand the passion and see how fanatical some people may be in its preservation. These knights, as guardians of the unwritten Indo Dutch law (how shall we call it? “Sharindo?”), severely condemn those who do not comply with this law. More Catholic than the Pope and with the monopoly on oriental wisdom, they proclaim “their word as the only truth.” Trapped in their metaphorical ‘box’ and their own created world of experience, there is little room for the ideas and opinions of others. I recognize the danger that lurks in absolutes or the danger in looking like you are trying to impose your opinion of the Indo Dutch cultural heritage on others. This particular view is often based on individual experience and traditions within ones own circle of family and acquaintances.

What can you accept as truth?

The thing that gives me a warm feeling of home and the desire to preserve the culture I grew up with, has me encouraged to examine the cultural history of the Dutch Indies** community before the 2nd World War—especially the cooking style and eating habits of way back when, over there, in the Dutch East Indies. For this, I consulted cookbooks and testimonies about the food culture, as written in various publications of the last 200 years. By now we have learned that Dutch Indies culture is characterized by diversity, it is similar to others, and yet united in one culture. What makes it difficult to specify, is where it starts and where it ends. What is the framework within which we have to continue? “Indo Dutch food was only cooked in the former Dutch East Indies,” some people say. Outside that geographic area the cuisine is already compromised, because of the lack of the original ingredients. Culture is liquid, it is in constant movement, and subject to change. It is used a lot to describe different things acquired by humans and what that is taking place in a country or region.

The preservation of the Indo Dutch food culture

I think that for the preservation of our Indo Dutch food culture, we should continuously benchmark the dishes against past criteria. This will evaluate if a dish still contains the specific features, to be deserving of its name Indo Dutch food. We can have discussion about what features they are. We can use some old and popular cookbooks as a guide and in particular point to the period of the Dutch Indies before Indonesian independence. With the exodus of the Indo Dutch people, to the Netherlands and other countries, the taste and cooking style came along with individuals. As a result, people cooked under local influences, which then affected the cooking style and resulted in further evolution of the cuisine.

I am in favor of keeping the cooking style within a framework of Indo Dutch cuisine. However, we should also consider the principles on which the Indo Dutch cuisine was founded: ingenuity, innovation, and fusion of European and Oriental cooking styles and eating habits. Here we must always make reference to the past, where the base was formed. Concepts such as ‘Grandma’s recipe from the Dutch Indies’ or ‘cooked in-the-style-of …’ or ‘inspired by …’, appeal to me the most. More needs to be done to keep the Indo Dutch culture alive. The ‘sharindo’ need not be fanatically followed. But, as suggested by my brother, we can use so-called guerrilla marketing, to get more attention. For example, try standing in the middle of a shopping mall rattling a rantang or banging a spatula on a wok shouting, “Apa Kabar!?!?”

All joking aside! I encourage everyone to be aware and to participate actively in the preservation and further development of the food culture that originated in the former Dutch East Indies. Let us respect each other’s opinions. Everyone must decide how they want to experience this mixed culture and include others into it.

**Dutch Indies – adjective used to refer to the former Dutch colony in Southeast Asia (not India), or is frequently seen as a political concept and geographical indication of the area under Dutch control. Socio-culturally, it refers to all the people belonging to the blended, all-inclusive (sub) culture that arose there.