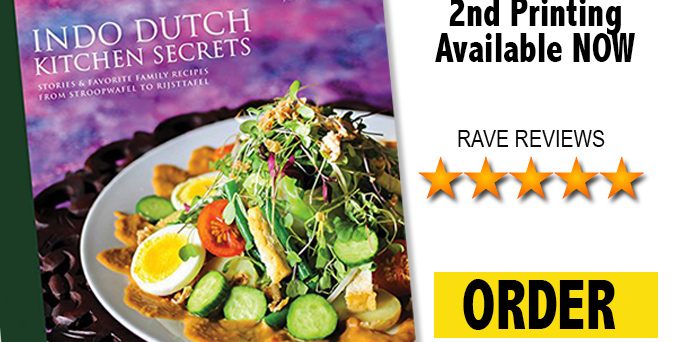 The responses to the 1st Indo Dutch heritage cookbook in English  Indo Dutch Kitchen Secrets were overwhelming. A review featured  in Good Magazine by reporter Nilina Mason-Campbell talked about the cuisine as ‘the tastiest fusion food you’ve never had’. Voice of Indonesia and Metro TV online reported on the book which celebrates Indonesian and Dutch culinary roots.

The book received ‘5-star’ reviews on social media and Amazon. People expressed their gratitude by posting testimonials and selfies with the book. Also pictures showing off the homemade dishes.  The book helped people to reconnect with their heritage, triggered fond memories of family and friends and the food they shared. Recipes considered lost forever, with the passing of relatives, were found again. Familiar smells filled their houses when they started cooking the comfort food of their childhood. Grandparents and parents gave their offspring a means to keep their heritage alive.  Others found the perfect culinary gift to introduce their friend to the culinary world of Indo Dutch cuisine, finally available in English.

The year 2016 was the start of a new and big adventure. I am very grateful for the support I received for this project and I am very proud of the list of accomplishments and milestones:

We have a busy year ahead of us. The challenge is to entice American foodies to explore Indo Dutch cuisine. We hope to get the attention of more regular media. We are working hard to prepare a second print run. In order to make that happen we need enough pre-orders – order here. We also want to cater to fans in Canada, New Zealand and Australia. Other countries are also being considered. Cooking demos and workshops are scheduled for California and other states are reviewed. Check our events calendar here. Canada book tour is in the works. Also, check our new vlogs on indofoodie.com.

We are very excited to continue the journey and invite people on our virtual food truck to enjoy the ride together! Spread the word and taste of Indo Dutch Cuisine. If you like to stay informed then sign up for our newsletter. Also, join our Facebook group Indo Dutch Cookbook. Thank you for your support and enthusiasm. As we say in Dutch ‘smakelijk eten.’

Check out the recipe for Huzarensalade.

Click here if you want to know more about me.