Is America Ready for Indonesian Food? 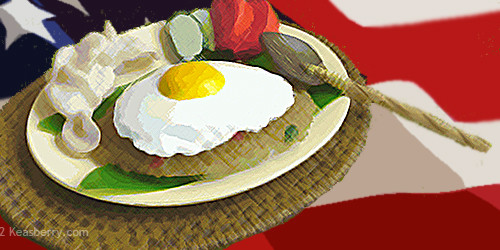 Indonesian fare is not so much different than Thai food when you compare the ingredients used in some dishes. From  exotically exclusive to almost common cross country, Thai food has won the hearts of Americans. There are about 450,000 Thai people in America and about 400 Thai restaurants in Los Angeles alone. There are about 150,000 Indonesian people in America* and just 50 Indonesian restaurants in the entire country. How come Thai food has a lot more presence in America?  For one, during the Vietnam War American troops were exposed to Thai culture and cuisine and many of the GIs brought home Thai wives. Then in the year 2002 the Thai government started their gastro-diplomatic campaign called Global Thai, to increase the number of Thai restaurants around the world. They succeeded. More people developed a taste for Thai food and were persuaded to visit the country.

Could Indonesian become the new Thai? That’s the question I asked myself while attending the session ‘promoting Indonesian restaurants in your host city’ at the Congress Indonesia Diaspora in Los Angeles, earlier this month. If it is up to the Indonesian government, that’s exactly their vision. However, looking at the number of restaurants in America, there is still a long way to go.

Indonesian restaurants don’t grow in large numbers, are not as profitable and have a high mortality rate. One of the factors is an unreliable workforce – the family they thought they could depend on, does not always want to work. They don’t last because of misleading goals; thinking that the many Indonesians in their area will support them.  Many Indonesians in America eat at home in the interest of saving money and just because they know how to make Indonesian food themselves. These are some of the observations of Mr. Roni Sjachrani, owner of the successful restaurant Bandung in Madison, Wisconsin.  Another reason is that kitchen and waiting staff do not feel part of a team and appear not to be proficient in properly presenting and delivering the menu. This hurts business.

Some pointers: train your staff and make them feel part of a team.  Important advice given by Mr. Yono Purnomo, successful entrepreneur, owner/chef of Yono’s in Albany New York. He also mentioned that he trained his Greek chef to cook an excellent ‘rendang,’ this to the amusement and surprise of Dr. Mari Elka Pangestu, Minister of Tourism and Creative Economy, key speaker at this session. She added that ‘Indonesian ambiance’ is important. Decoration advise will be provided by the government. It’s also  about the attitude;  leading by example and perseverance, said Mr. Iwan Sudarsono, entrepreneur in California. Know who your target audience is.  If it is the local business, join the local chamber of commerce and entice members with discounted lunch specials for example. Invest in community outreach.  I share the panel’s observations and tips and would also like to add that the focus should be on palatable food. Speaking out of experience, having managed the family restaurant in Amsterdam, I would say to focus on appetizing menu items. Without making too many concessions to the authenticity of a recipe, consider the packaging – think ‘eye candy.’ Educate and guide your guests on this culinary journey. Lower the threshold and seduce your guests with attractive and easy to understand menu items. The Thai have already claimed the ‘satay ajam’ and the ‘peanut dressing’ over the salad. Wait until  America gets  a taste of the Indonesian original. I am going to make my Dad’s Nasi Goreng and invite my neighbors.

The Rijsttafel a Culinary Tradition
September 2, 2022