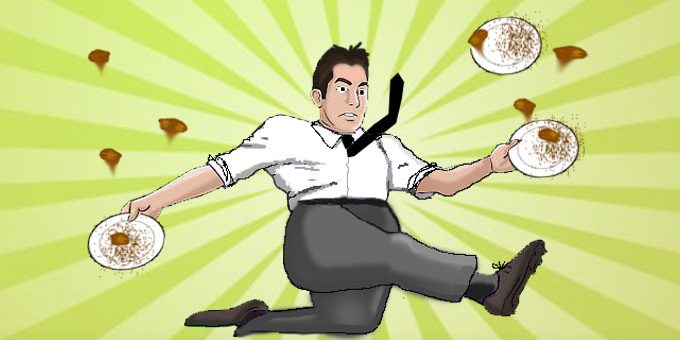 When eating my Indo Dutch soul food, I often get memory flashbacks that I associate with the dish I eat. When eating fried bananas (Pisang Goreng) for example, I am catapulted back in time to the family restaurant Djokja in Amsterdam, where I grew up. There was never a dull moment. If you were able to travel back and take a peak, you would see the restaurant as the stage for a comedy show. There were often embarrassing situations where I felt as though I wanted to disappear, but now I can laugh about it. There was this one evening where I had to wait on tables. Our restaurant was packed. There was the buzz of talking and laughing people, the clatter of cutlery on plates, sounding glasses and the loud voice of a guest who held up his hand and addressed me: “Waiter, where is our Pisang Goreng? We have to go to Carré theater!” As I cleared a table, he got an affirmative nod from me and I pointed to the kitchen, with which I wanted to tell him that I understood and was about to pick up his order. The golden brown fried bananas were waiting on a tray ready to be served on plates. I was asked to do this plating myself because there was not enough staff that night. Five portions were ordered and 5 golden brown banana fritters were placed on each plate. I poured over the melted Gula Jawa and topped it off with some cinnamon powder. Oh, so scrumptious! Meanwhile, my father looked around the corner of the kitchen to urge me to hurry up. I remember thinking ‘here it goes!’ balancing 4 plates in my left hand and the 5th in my right hand, walking out of the kitchen into the restaurant area I started sprinting in the direction of the table. “Waiter, can I get the bill?”, I heard a lady call when I quickly walked by her table. My next step would make me turn left, in front of the bar, towards the table where the people were waiting for their dessert. They saw me coming already. I do not know what happened next, but perhaps because of my hasty step I put my left foot wrong and I slipped or to speak in soccer terms I did a slide tackle.

I remember this moment as if it were playing in slow motion; I felt my body descending to the ground and saw the fried bananas flying upwards to the ceiling. When I had landed on the floor, with one plate still in each hand, a few fried bananas landed back on the plates: plok, plok, plok! This while I felt all the eyes of the startled guests watching me. As the leading actor of this bad episode I felt I was going crazy. I did not know how fast I had to get up and out of this slapstick movie. In the haste I collected the fallen bananas and during my exit I quickly asked my father if he wanted to present the bill to the theater-goers, with my sincere apologies. I could hear my father say: “Haste makes waste!”

The moral of this story: it does not need a banana peel to go bananas!

The family recipe of Pisang Goreng as we served it in the restaurant and still do at home, can be found in my cookbook Indo Dutch Kitchen Secrets – the first Indo Dutch Heritage Cookbook in English.